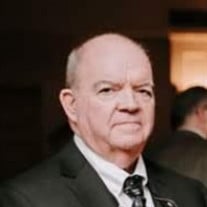 Robert Lloyd “Bobby” Ellerbe, Sr., 77, of 144 Mountain Shore Drive, passed on Tuesday, September 7, 2021 at Self Regional Medical Center. Born in Anderson, he was a son of the late Alexander Russell and Margaret Lloyd Ellerbe. Bobby was a 1962 graduate of Greenwood High School and was the sales manager for multiple local car dealerships during his career, including Johnson Motors, C. Thompson Automotive and Fortner Auto Sales. He was also the former owner of Ellerbe Automotive and Harbor Light Grocery. Bobby loved his life on Lake Greenwood and was an avid Nascar and Indy racing fan, enjoyed dirt bikes and any sport that involved a ball. He was a member of The Episcopal Church of the Resurrection, where he served as an usher. Bobby is survived by his sons, Robert L. “Bert” Ellerbe, Jr. and Russell J. Ellerbe (Jenna Britt); his sister, Peggy Stroud (Edwin) and his girlfriend, Mary Frances Anderson, all of Greenwood; grandsons, Ryan Hart Ellerbe and Cameron Alexander Ellerbe and a great granddaughter, Aryan Vy Ellerbe. In addition to his parents, he was also preceded in death by his brother, Russell Lloyd “Rusty” Ellerbe. A graveside service will be held at 12:00 noon on Saturday at Edgewood Cemetery with Elder Michael Fisher officiating. The family will receive friends at Harley Funeral Home on Saturday from 10:00 – 11:30 a.m. While in the funeral home, masks are required to be worn. Family members are at their respective homes. In lieu of flowers, it is requested that memorials be made to The Episcopal Church of the Resurrection, PO Box 3283, Greenwood, SC 29648 or to The Humane Society of Greenwood, PO Box 49776, Greenwood, SC 29649 (www.gwdhumanesociety.org).

The family of Bobby Ellerbe created this Life Tributes page to make it easy to share your memories.

Send flowers to the Ellerbe family.