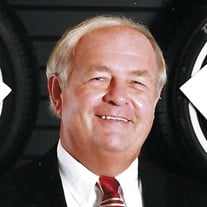 Don L. Helker, 78, resident of Greenwood, beloved husband of Sondra Welch Helker, passed away peacefully Saturday, December 11, 2021, surrounded in love by his family at Hospice and Palliative Care of the Piedmont after a brief illness. Born in Cumberland, Maryland to the late John Lewis Helker and Edith Murray Helker. Don attended Allegany Community College in Cumberland, MD and Frostburg State University in Frostburg, MD. He was a longtime employee of Kelly-Springfield Tire Company where he served as Accountant Executive in Custom Brand Sales Division. He continued his career in the tire business over the next fifteen years with Del-Nat Tire, Memphis, TN and Hercules Tire Company, Findlay, OH. Don took great pride in the numerous personal friendships he established throughout his career that continue to this day. He was a member of St. Mark United Methodist Church where he was a member of the Charles Poore Sunday School Class. An outstanding football player during his high school and college years, he later went on to excel in tennis and enjoyed a sociable game of golf as a member of The Links at Stoney Point Golf Club where he played weekly with several long time friends. Don had a sharp wit and wonderful sense of humor who never walked away from having a good time. He especially enjoyed playing Santa and visiting local children in his golf cart on Christmas Eve and arranging interesting tours open to all Stoney Point Residents. Family was Don’s priority. He never missed the opportunity to watch his son play college football, attend his daughters dance recitals that earned him “Father of the Year” award in 1979 causing his other male friends unbelievable grief. Don has continued that tradition with his grandchildren whether it was watching his oldest grandson play golf, his middle one searching for the “best burgers in town” or a cheerleading exhibition with his only granddaughter. Surviving in addition to his wife of fifty three years are a daughter, Sharyl Connor and husband Russ, of Waterloo, SC; a son, Greg L. Helker and fiancée Ginger Sibley, of Mauldin, SC; two grandsons, Jon Lewis Parker and significant other, Lindsey Wiggins, and Andrew Lewis Helker; and granddaughter, Lilah Marie Helker. Don and Sondra also have a special relationship with their adopted daughter, Julie Joyner and husband John, of Wilson, NC. A memorial service will be conducted at 1pm on Saturday at Harley Funeral Home Chapel, 1025 South Main Street, Greenwood, with family receiving friends before the service from 12-1 pm. Following the service, a celebration of Don’s life will be held at The Links at Stoney Point Clubhouse from 4-6pm. In lieu of flowers memorials may be made to Greenwood Humane Society, PO Box 49776, Greenwood, SC 29649 or to a charity of your choosing. View service here:https://youtu.be/OIOuPXRALMU

Don L. Helker, 78, resident of Greenwood, beloved husband of Sondra Welch Helker, passed away peacefully Saturday, December 11, 2021, surrounded in love by his family at Hospice and Palliative Care of the Piedmont after a brief illness.... View Obituary & Service Information

The family of Don Helker created this Life Tributes page to make it easy to share your memories.

Send flowers to the Helker family.