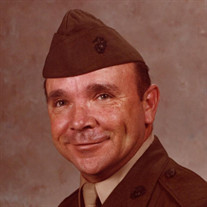 Donald “Don” Lee Lomax, Sr., 78, of Greenwood, husband of Darlene Lee Lomax, passed away Saturday, March 6, 2021. Born in Greenwood, he was a son of the late Ernest J. (EJ) Lomax and Sara Collins Lomax. Mr. Lomax was a US veteran, where he served with the Marine Corps for 25 years and completed three tours in Vietnam. He was stationed at Camp Lejeune, N.C. and later Hawaii, retiring in 1986. After serving in the Marine Corps, he began his law enforcement career with the Ninety Six Police Department, Laurens City Police Department, and Greenwood County Sheriff’s Department, where he retired in 2015. Don was a member of Ninety Six Church of God, where he was a member of the Sanctuary Sunday school class. Surviving in addition to his wife of the home are his children, Donald “Donnie” Lee Lomax, Jr. of Greenwood, James Edward Douglas “Doug” Lomax and his wife, Tammy of Lake Charles, LA, and Hope Morjorie Imogene Jacks and her husband, James “Hal” of Toccoa, GA; stepchildren, Renea Maye Brock and her husband, Scottie of Bishopville and Raymond Curtis Lomax of Hartsville; siblings, Virginia Clary of Saluda, Linda Pound (Doodle) of Lexington, Faye Horne (Ronnie), Joyce Horne (Mike), both of Hodges, James “Jim” and Melba Lomax of Iva, and Raymond “Ray” and Debbie Lomax of Greenwood; fifteen grandchildren; six great grandchildren; and many nieces and nephews. Don was preceded in death by siblings, Louise Lomax, Danny Lomax, Rachel Lomax Massey, Nina Lomax Turner, Jeanette Lomax Kennedy, and Dennis Wayne Lomax. A graveside service, with full military honors, will be held at 1:00 p.m. on Wednesday at Greenwood Memorial Gardens with the Rev. Dwayne Strickland and Rev. Milton Stubblefield officiating. The service will be recorded and uploaded to Don’s life tribute page by visiting www.harleyfuneralhome.com, where you can leave messages for the family. Honorary escort will be the Greenwood County Sheriff’s Department. The family will receive friends at the cemetery immediately following the service. Memorials may be made to Ninety Six Church of God, PO Box 297, Ninety Six, SC 29666 or the Faith Home: Christian Recovery, PO Box 39, Greenwood, SC 29648. The family members are at their respective homes.

The family of Don Lomax Sr. created this Life Tributes page to make it easy to share your memories.

Send flowers to the Lomax family.