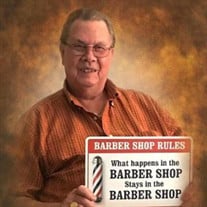 Mr. Douglas Alton Anderson, 78, of Tate Street, Elberton, husband of 60 years to Rebecca Ann Bone Anderson, passed away on Tuesday, December 15, 2020, at St. Mary’s Hospital in Athens. Doug was born in Elberton on May 17, 1942, son of the late Alfred Arthur Anderson and Florence Mills Anderson. He was a 1960 graduate of Elberton High School and served his country with the U.S. Army National Guard. Mr. Anderson started cutting hair at the age of 14 without knowing that was the beginning of a career to last 64 years. Anderson’s Barber Shop has been a staple on the Elberton Square for many years. Growing up in Elberton, it was a right of passage for many young men to sit in Doug’s barber chair, get a squirt of “monkey juice”, and have their hair cut for the first time. The visit concluded with a glass bottle coke and a piece or two of Double Bubble bubble gum! His older clients knew Doug was always in for a good joke, to lend a listening ear, and to be a source of advice when needed. The lives he touched in that subterranean barber shop on N. Oliver Street will continue to impact generations. Doug was a 60 year member of Philomathea Masonic Lodge #25 and was also a member of the Jaycees and First Baptist Church of Elberton. For over 20 years, he played bass guitar in a country band with Neil Cromer, Doug Holloman, Marion Lewis, John Heard, and Glen Dixon. Above all of his accomplishments, his most prized possession was his family. He was a loving husband to his wife, Becky, a devoted father to his daughters, the late Angela Anderson, Lisa (John) Ruffin, and Denise (David) Brown, and a doting “Papa” to his grandchildren, Tim (Christina) Brown, Angelina Ruffin, and Abby Ruffin. He is also survived by his aunt and adopted mother, Marietta Gaines Bailey. Although we will miss him dearly, we take comfort in knowing that he has been reunited with his brother, Doyle, whom he missed tremendously. Funeral services celebrating Doug’s life will be held on Friday, December 18, at 2 o’clock at First Baptist Church of Elberton. Interment will follow in Forest Hills Memorial Park. Doug will lie in state at Berry Funeral Home on Thursday, December 17, from 12:00-6:00p.m. for those wishing to pay their respects and sign the guestbook, as well as at First Baptist Church for one hour prior to the service on Friday. Social distancing will be observed at all events. Flowers are accepted and contributions may be made in his memory to the charity of one’s choice. Due to the coronavirus and for the safety of Mrs. Anderson, the family respectfully request no visitors or food to the residence. They do, however, greatly appreciate the phone calls and outpouring of love that has been received from the community. Those wishing may sign the online guestbook at www.berryfh.com. Berry Funeral Home & Crematory of Elberton is respectfully in charge of arrangements for Mr. Douglas Alton “Doug” Anderson and has been placed on our website as a courtesy for the family who lives in Greenwood.

The family of Douglas Anderson created this Life Tributes page to make it easy to share your memories.

Send flowers to the Anderson family.