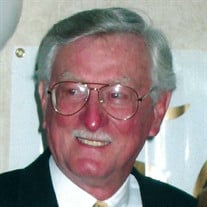 Edward Francis Cleary passed away at his home surrounded by his loving family Sunday, November 22, 2020. He was preceded in death by his wife, Shirley Howey Cleary; a son-in-law, David Matthews and a grandson, Sean Matthews. Surviving are his six children: Tim Cleary (Trish) of Fort Worth, TX; Sue Matthews of Greenwood, SC; Bob Cleary (Charlotte) of Summerville, SC; Sharon Flowe (Rick) of Kannapolis, NC; Gail Richards (Jonathan) of Salt Lake City, UT and Nancy Kosick (Byron) of Ivins, UT; fourteen grandchildren; five great-grandchildren; and many grand-dogs and cats. Born in Fairfield, Connecticut, he was the son of the late John Edward Cleary and Anna Lill Cleary. After serving a tour of duty in the U. S. Army during WWII, he obtained a degree in Pharmacology from the University of Connecticut. While expanding his career at Parke Davis in Detroit, Michigan, he met and married his wife of 55 years, Shirley. With a transfer from Parke Davis, Ed, Shirley and their six children moved to Greenwood, SC. Quite a change from Detroit, but they grew to love this town dearly. Ed’s career spanned over 30 years with Parke Davis, Warner Lambert and Becton Dickinson where he was Director of Quality Control and Government Regulations. He was especially proud to be chosen to serve on the United States Pharmacopeia. His work took him to Salt Lake City, Utah and eventually retired back to Greenwood, SC. Following his retirement he found volunteering at Self Regional very fulfilling. Over the years Ed enjoyed time in his garden, golfing, working on model ships and worldwide travels and cruises with his wife Shirley. They loved to dress up and dance! Lakehouse time was filled with family fun, boating and especially a good game of Risk. Of course, the highlight of the “Cleary Clan” was Mom and Dad’s annual gift of the beach trip. This included crazy theme nights complete with costumes, room transformations and “friendly” games of competition. Family time has always been Ed’s priority and his legacy will live on in this way. After the passing of his beloved wife, Ed was blessed to find love again. Shirley Walker became his fun, loving, devoted companion for the past 12 years. The family would like to express their sincere gratitude to the loving care he received from the “Dream Team” of 180 Health and Wellness along with NHC for the dedication and compassion given to our father. The family will hold a private service at Oakbrook Memorial Park Mausoleum Chapel. So raise your glass to Mr. Cleary, Dad, The Big Kahuna, CEO of the Cleary Clan, Poppy, Papa, Grandpa… We will miss you and love you forever. In lieu of flowers the family has requested that memorials may be made to Hospice House, 408 West Alexander Avenue, Greenwood, SC 29646.

Edward Francis Cleary passed away at his home surrounded by his loving family Sunday, November 22, 2020. He was preceded in death by his wife, Shirley Howey Cleary; a son-in-law, David Matthews and a grandson, Sean Matthews. Surviving... View Obituary & Service Information

The family of Edward F. Cleary created this Life Tributes page to make it easy to share your memories.

Edward Francis Cleary passed away at his home surrounded by his...

Send flowers to the Cleary family.