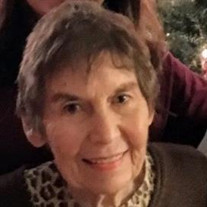 Faith Packard Welling Killius, 84, resident of Wesley Commons, wife of Richard “Dick” W. Killius, passed away Wednesday, August 18, 2021. Born in Columbus, OH, Faith was a daughter of the late Park and Esther Packard Welling. She received her Bachelor of Arts degree from The Ohio State University. At Ohio State she was a proud member and former president of the Chi Omega Sorority. Faith enjoyed a career as the General Manager at the Beck Center for the Fine Arts, a community theater, in Lakewood, OH. Faith volunteered for many organizations in the Cleveland/ Lakewood area including; the Adult Committee for Young Life; Historical Society of Lakewood; PEO; and the Lakewood Little Theater, where she did the make up for all productions. She was a member of the Red Hat Society as well as a volunteer for the Helping Hands in McCormick. She was a member of McCormick United Methodist Church and resided in Savannah Lakes for fourteen years. Surviving in addition to her husband, Richard, are her children, Chip Killius (Merri), Greg Killius, and Robbie Curtis (Jim); grandchildren, Esther, Helen, Elizabeth, Maddie, and Anna, all of Ohio; and two nieces, Tammy of Mississippi and Faith of Tennessee. In addition to her parents, she was preceded in death by her sister, Diane Chance. A memorial service will be announced and held at Wesley Commons. The family would like to acknowledge the staff of Hospice and Palliative Care of the Piedmont for their care and support.

The family of Faith Killius created this Life Tributes page to make it easy to share your memories.

Send flowers to the Killius family.