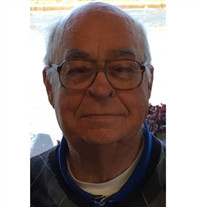 Fred Walker Leopard, age 86, went to his eternal home on Thursday, February 4, 2021. Born September 18, 1934, in Ninety Six, SC, he was a son of the late Robert Burley and Mattie Lou Ellison Leopard. He was one of nine children. Fred worked in Greenwood Mills for more than 51 years in the Card Room at the Ninety Six, Adams, Matthews and Harris Plants. Following retirement, he drove for Piedmont Agency on Aging for several years. Fred was a faithful member of Ninety Six Church of God. Through the years, he served as Choir Director, Sunday School Superintendent, Council Member, Bus Driver and was always called upon when thing needed “fixing”. He obtained his license as Minister of Music for the Church of God and served in multiple churches including Elizabeth Street Church in Clinton and Restoration Ministries in Greenwood (previously South Greenwood Church of God). In addition, he traveled for many years singing with the gospel group, Joint Heirs, which included his youngest daughter, Noel and her family. He loved going to church. He would often attend other churches when his own church did not have services. He loved walking at the mall and just being around people. You could always find him, when he was able, sitting at Hardees talking to friends and family. He never met a stranger! He was quite a “comedian” which was fitting since he was named after a comedian from the 40s. Most of all, he loved God and sharing his testimony with others. He was known to most as “Papa Fred”. Fred resided in his home in Ninety Six, where he was cared for during his last few months by his oldest daughter, Angela. In addition to his parents, Fred was preceded in death by his two spouses. His first wife of 28 years and mother to his children, Patricia Faye Carithers Leopard, passed on May 10, 1982 and his second wife of 27 years, Mary Joyce Medlock Leopard, passed on April 26, 2011. He was also preceded by three sisters, Nettie “Sis”, Blanche, and Ann. Surviving are his children, one son, Roger Neal Leopard (Rachel) of Ninety Six and three daughters, Angela Leopard Seymour of Ninety Six, Velvet Fredna Leopard Dixon (Jeff) and Noel Patricia Leopard Shiflet (Richard), both of Greenwood; four stepsons, Gene Wooten (Barbara), Michael Wooten (Sandra), Dan Wooten (Joanne) and Keith Wooten. He was blessed to have 8 grandchildren, 8 step grandchildren; 9 great grandchildren and 11 step great grandchildren. He is also survived by five siblings, his brother, Bob, and four sisters, Jeanette, Joyce, June and Marie. Services will be at 1 p.m. on Saturday at Ninety Six Church of God with the Rev. Michael Wooten and the Rev. Dwayne Strickland officiating. The service will be recorded and can be viewed later by visiting Fred’s life tribute page at www.harleyfuneralhome.com where messages may be left for the family. Burial will follow in Greenwood Memorial Gardens. Pallbearers will be grandsons and grandsons-in-law. The family will receive friends at the church before the service from 11:30 – 1:00 on Saturday.

Fred Walker Leopard, age 86, went to his eternal home on Thursday, February 4, 2021. Born September 18, 1934, in Ninety Six, SC, he was a son of the late Robert Burley and Mattie Lou Ellison Leopard. He was one of nine children. Fred... View Obituary & Service Information

The family of Fred W. Leopard created this Life Tributes page to make it easy to share your memories.

Send flowers to the Leopard family.