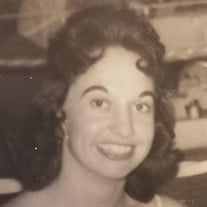 Jennie Ruth Holsonback Cavanaugh of 210 Circle Drive, Greenwood, SC transitioned peacefully into her heavenly home early Friday morning, November 6th, 2020, following a brief illness. Jennie was born October 20th, 1931, to the late Robert E. Holsonback and Elsie Compton Holsonback. In addition to her parents she was preceded in death by her grandparents, Ellis L. and Jennie DeVore Compton; Daniel Holsonback and Fannie Holsonback Maynard; double-first cousin, Sandra M. Compton plus many very special Uncles, Aunts, Cousins, and friends. Surviving are her daughter, Virginia Keagle of Roswell, Ga.; son, Robert Cavanaugh (Lesley) of Greenwood; grandchildren: Judith Ellis Cavanaugh, Anna Bryce Cavanaugh and Robert Harrison Cavanaugh; a great grandson, Bryden Ellis Cavanaugh; her very special neighbor, care giver, and friend, Jean Goodman; plus numerous cousins and friends. Jennie was of the Baptist faith. The Callie Self Memorial Baptist Church was dedicated in 1939 when Jennie was eight years old. Her Mother, Elsie Holsonback, became the organist and Jennie, a very talented musician, was the pianist through her teen years. Jennie graduated from Greenwood High School in 1947, the last "11th grade" graduating class. She also graduated from the Greenwood College of Commerce and was noted for her skilled efficiency in shorthand and typing. Her career took her to Washington, DC where she worked in the office of the late Congressman Bryan Dorn. Later she worked in the office of the late Senator, Olin D. Johnston. During these years she was married to the late Thomas J. Cavanaugh, DDS. and had two children. In 1989 she returned to Greenwood and moved into the home on Circle Drive with her widowed father, Robert Holsonback. During her senior years she continued to work and loved her position in the office of Greenwood County Magistrate, Joe C. Cantrell. She retired at the age of 75 from the courthouse. A CELEBRATION OF LIFE for Jennie H. Cavanaugh will be observed Saturday, November 14th, 11:00 am, at the New Market Baptist Church in Greenwood, SC. Due to the current pandemic crisis social distancing will be observed and masks are encouraged. The family suggests that memorials be made to the Connie Maxwell Children's Home in Greenwood, New Market Baptist Church, or to a charity of choice.

The family of Jennie Holsonback Cavanaugh created this Life Tributes page to make it easy to share your memories.

Send flowers to the Cavanaugh family.