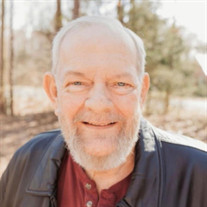 John Howard Hodge, 64, of Nation Road, husband of Dora Brock Hodge, entered into eternal rest with his Lord and Savior on Wednesday, March 31, 2021 at his home. Born in Summerville, SC on April 28, 1956, John was the son of the late Andrew James, Jr. (AJ) and Ada Barnes Hodge. He lived a large part of his childhood and adult life in Greenwood, SC and surrounding areas. The baby of seven children, John was well loved and loved well in return. He graduated from Greenwood High School in 1974. After high school, he was an automotive technician at Ben Milton Chevrolet and K-Mart. John was a loom fixer at Greenwood Mills, Mathews Plant as a young adult. In 1989, John became a career truck driver. He traveled the country as a driver for Am-Can, Southern Brick in Ninety Six (later Hansen & Richtex), Cromer Trucking, and finally as the owner of John Hodge Trucking. John was a true outdoorsman and was always happy with a fishing rod or a shotgun in his hand. He spent many weekends on the Santee Canal or in a stand at his hunt club in which he took so much pride. You could often find him clad in camo, stirring a big pot of his famous catfish stew. John loved people and was happiest surrounded by his family and friends. He loved the Lord and was a member of North Side Baptist Church. John’s legacy is carried on by his wife, Dora, of the home, his daughters, Carmen (Brian) Rackley of Greenwood, Chelsea Pelletier of Greenville, and Rachel Hodge of Greenwood; his beloved grandchildren, Lexi Rackley and Jaxon Salters; brother, Andrew James, III (Balinda) Hodge of Greenwood; sisters, Carol Rebecca Flowers of Florida, Malinda Rae Alsbrooks of Summerton, Lottie Maxine Crawford of Greenwood, and Deborah Jean Morrow of Lincolnton, GA; his mother-in-law, Virginia Allen; a special sister-in-law, Teresa Elmore; his best friend, George (Junior) Davenport; and numerous nieces and nephews. He was preceded in death by his parents; a daughter, Michelle Hodge; brother, David Allen Hodge; and father-in-law, Wilton Delano Brock. A celebration of life will be held at 3:00 p.m. on Saturday at the Harley Funeral Home Chapel with Dr. Jeff Lethco officiating. The service will be lived streamed and available to view by visiting John’s life tribute page at www.harleyfuneralhome.com, where you can leave messages for the family. The family will receive friends from 2:00 – 3:00 p.m. on Saturday at the funeral home. The family members will be at the home of his daughter, Carmen. To view service click here https://youtu.be/tazjoa7bDgc

John Howard Hodge, 64, of Nation Road, husband of Dora Brock Hodge, entered into eternal rest with his Lord and Savior on Wednesday, March 31, 2021 at his home. Born in Summerville, SC on April 28, 1956, John was the son of the late Andrew... View Obituary & Service Information

The family of John Hodge created this Life Tributes page to make it easy to share your memories.

Send flowers to the Hodge family.