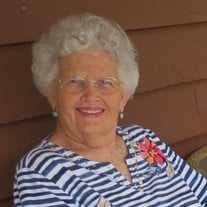 Kathryn Gable Edmonds, wife of Bobby Franc Edmonds, passed away peacefully on Friday, April 15, 2022 at her Cedar Hill home, surrounded by her beloved family. Kathryn, called “Lady K” by her husband, a product of the “greatest generation,” was born in the small Gable home in the Liberty Hill family community during the Great Depression on February 25, 1939. She was a daughter of Jefferson Augustus and Sarah Rebecca White Gable. Kathryn attended Plum Branch School and McCormick High School. Kathryn was a much-adored high school beauty queen with the clear and practical mind of a farm girl. For many years she was a much admired and appreciated teacher. She taught hundreds of students in McCormick Elementary School, Long Cane Academy and in her Cedar Hill private preschool. Her favorite teaching was probably to kindergarten children. Throughout her life she received great satisfaction watching her students achieve out in the real world. The hundreds of children she taught are her legacy. There was almost nothing Kathryn could not do if she put her mind to it. She loved gardening and flowers of every kind. She was an excellent seamstress, sewing clothes for her family, clogging outfits, costumes for school operettas, and even sweatshirts for her daughter’s dog. She loved arts and crafts of all kinds and ran a craft shop for several years with her dear friend Phyllis Albert. She also held summer art camps for children at her home. Kathryn and her husband ran a photography business from their home for several decades, where she assisted with the photography, developing the pictures in the darkroom, and she hand-colored the black and white pictures with oil paints. During the five years she and her husband owned Edmonds Seafood Restaurant on Main Street in McCormick, she held every job from manager to waitress to cashier to cook. Kathryn was active in the historical society. She and her husband Bob were determined to form a local clogging team. They attended classes in Aiken and soon recruited many more dancers and organized McCormick County Gold Dust Cloggers. Kathryn Edmonds also formed the Gold Nuggets, Kathryn’s Angels, Kathryn’s Dillies, and the Dixieland Cloggers at the fire department in Parksville, and later Southern Pride Cloggers at her Cedar Hill studio. Kathryn’s greatest joy was a loving family. She met the love of her life, Bobby Franc Edmonds at the Hollywood Theatre in McCormick in spring 1954; after a few months’ courtship Bob and Kathryn were married the day before Christmas Eve by Dr. E. F. Gettys at the De la Howe chapel. Bob and Kathryn were forever devoted to each other. Kathryn embraced the new life of becoming an integral partner the Cedar Hill Farms LLC with affection and hard work and over the years became a treasured source of love and wisdom to everyone she touched in her life. Kathryn and Bobby’s life together centered around family, faith, work, and service. They were blessed with a wonderful daughter, Bonnie Franc, and her husband Rodney K. Brown, two granddaughters, Mallory Lillian Brown Cameron, and her husband Tanner Cameron, and Darby Rose Brown, and two great grandchildren, Ryland Franc Cameron and Kennedy Noel Cameron, amid sixty-seven years of married life. After Bob and Kathryn married, they joined Buffalo Baptist Church. After a few years they transferred membership to McCormick First Baptist Church where she taught Sunday School for many years. They later united with Pressley Memorial Associate Reformed Presbyterian Church. In 2002, they returned to Buffalo Baptist Church. In addition to her parents, Kathryn was predeceased by brothers Harold, Leo, and Lawrence, sisters Ethelene Patterson and Janie Jennings. Surviving her are sisters Vera Richey, Lila Holloway, Alma Palmer, and Lorene Fuller. A Celebration of Life will be held on Tuesday at 11:00 a.m. at Buffalo Baptist Church in McCormick with the Rev. Martin Wiles officiating. The family will receive friends from 5:00-7:00 p.m. on Monday at Harley Funeral Home in Greenwood. Pallbearers will be Tanner Cameron, Neal Jones, William Frank “Bill” Walker, Shannon Wilkie, William D. “Bo” Willis, and Neil Wright. Honorary Escort will be Ebie Grier, George Long, Jack Parker, and the faculties and students of Long Cane Academy. Memorials may be made to Hospice & Palliative Care of the Piedmont, 408 West Alexander Avenue, Greenwood, SC 29646 or to Buffalo Baptist Church, PO Box 345, McCormick, SC 29835.

Kathryn Gable Edmonds, wife of Bobby Franc Edmonds, passed away peacefully on Friday, April 15, 2022 at her Cedar Hill home, surrounded by her beloved family. Kathryn, called &#8220;Lady K&#8221; by her husband, a product of the &#8220;greatest... View Obituary & Service Information

The family of Kathryn Gable Edmonds created this Life Tributes page to make it easy to share your memories.

Send flowers to the Edmonds family.