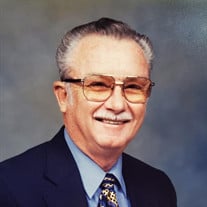 Jessie Lanier Williams, 87, of Lowell Street, Ninety Six, widower of Joan Douglas Williams, passed away on Friday, December 11, 2020 at home in his bed, surrounded by his family. Born in Commerce, GA, he was a son of the late Robert Lee and Azzie Lee Morrison Williams. Lanier went to work for Greenwood Mills in July 1949 at the age of 16, where he worked in all of the plants during his career, retiring in 1995 as a supervisor at the Mathews Plant in open end spinning. He was a member of the Quarter Century Club. He and Joan were married in 1968 and spent the next 44 years totally devoted to each other. Lanier was raised in a military family and had always wanted to serve his country. He registered with the Selective Service in 1951 and tried unsuccessfully three different times to enlist in the Armed Forces. Lanier is survived by his sons, Travis Williams and his wife, Regina, of Ninety Six and Sid Williams of McCormick; his daughter, Frankie Henderson and her husband, Jeff, of Anniston, AL; grandchildren, Kristina Williams (Chris Fyock), Ashley Williams (Clay Curreri), Taylor Williams (Tyler Laughlin), Spencer Williams, John Clark, Jr. (Lori) and Jason Clark (Amy); great grandchildren, Nathan and Kayliegh McCary, Kai and Atehaia Fyock, Melody and Valerie Curreri, Haley, Lily, Robert Jr., Emily and Billy Clark, Logan and Gavin Clark and Brittany Vinyard. In addition to his wife, he was also preceded in death by a son, Curtis Williams; his sister, Polly Preece Smith and his brother, Hughey “PeeWee” Williams. A graveside service will be held at 3:00 pm on Tuesday at Greenwood Memorial Gardens with the Rev. Chuck Sprouse officiating. The service will be recorded and available for viewing later by visiting Lanier’s life tribute page at www.harleyfuneralhome.com. Honorary escort will be Jerry Eichelberger, Mickey Goodman, Ricky Turner, Jr., Kai Fyock, Keith Roller and Randy Harvley. Lanier regularly sent donations to the Paralyzed Veterans of America and the family would appreciate it if contributions could be sent to them in his memory. The mailing address is PVA, National Processing Center, O Box 758593, Topeka, KS 66675-8593 (www.PVA.org/supportveterans).

Jessie Lanier Williams, 87, of Lowell Street, Ninety Six, widower of Joan Douglas Williams, passed away on Friday, December 11, 2020 at home in his bed, surrounded by his family. Born in Commerce, GA, he was a son of the late Robert Lee... View Obituary & Service Information

The family of Lanier Williams created this Life Tributes page to make it easy to share your memories.

Send flowers to the Williams family.