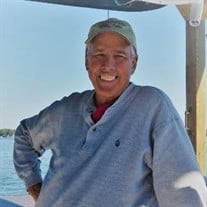 Lawrence “Larry” Ernest Disharoon, 65, of 105 Peninsula Way, husband of Maureen O’Hagan Disharoon, passed away Wednesday, September 1, 2021 at his home. Larry was born in Baltimore, MD to the late Wilbur Ernest Disharoon and Mary Helen Warfield Disharoon. His father moved the family to Ocean City, MD, where he was raised and loved the ocean. He received his bachelor’s degree in Political Science and worked for over 40 years in program management. The first 24 years he spent working as a private contractor for the Department of the Navy, and he spent the next 13 years as a civilian as a Deputy Program Manager for Classified Programs at NAVSEA PMS 340. His duties primarily supported special operations forces (SOF) classified programs until he retired in 2018. He was a Baltimore Orioles baseball and Baltimore Ravens football fan and enjoyed watching lacrosse and field hockey. He was a big supporter of NASA missions, especially the Hubble Space Telescope and James Webb Space Telescope projects. Larry was family oriented and enjoyed leisure time while sitting on his porch overlooking the lake. He was warmly welcomed into the “Boys of Greenbelt” and the Frostburg Bobcat families as well as the O’Hagan Cassidy family. Christmas Eve celebrations that he hosted will be a legacy that will continue. The simple things in life are what made Larry the happiest, such as boating, pirate adventures on the lake, and watching his kids compete in sports. He was a member of Holy Family Catholic Church in Davidsonville, MD. Surviving in addition to his wife, Maureen, are his children, Bradley Scott Disharoon, Lauren Ashley Tokarcik (Brian), Kristan “Casey” Cassidy Davis (Jake), and Kerianne Brinkley Dean (Josh), all of Maryland; sisters, Diana Eastman (David) and Mary Clark (Kevin), both of Pawley’s Island, SC; sister-in-law, Louise Disharoon of Scotland; five grandchildren, Owen, Luke, Landon, Cole, and Logan; and multiple extended family and friends. In addition to his parents, he was preceded in death by his brother, Bob Disharoon. A memorial service will be held on Saturday, October 9, 2021 at 10:30 a.m. at Holy Family Catholic Church in Davidsonville, MD: 826 Central Ave Davidsonville, MD 21035 Due to COVID restrictions, a private inurnment for immediate family will also take place at 1:00 on Oct. 9 at Lakemont Memorial Gardens (Davidsonville, MD) in the small chapel. In lieu of flowers, donations may be made to the C4 Foundation (www.c4foundation.org) providing support services for Navy SEAL families or to Fish for a Cure (www.fishforacure.org) who provide cancer care to the Annapolis community.

The family of Larry Disharoon created this Life Tributes page to make it easy to share your memories.

Send flowers to the Disharoon family.