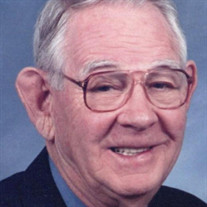 Marett Nelson Wilson, 91, of 206 Autumn Trace, widow of Reba Stroud Wilson, passed way Saturday, October 31, 2020 at Hospice and Palliative Care of the Piedmont. Born in Oconee County, he was a son of the late Dewitt Talmadge Wilson and Ina Cowan Wilson. He retired from Steifle Appliances and was a US Navy veteran, where he served during the Korean Conflict on the submarine tender, USS Sperry, based at Pearl Harbor. Mr. Wilson was a member of Westside Baptist Church, where he was a deacon emeritus, Sunday school teacher, and usher. He was proud to serve his church wherever the need was for seventy-five years. Surviving are his daughter, Monta Leister (Bill); sister, Wilma Ponder; brother, Ralph P. Wilson (Marie); son-in-law, Richard Moss; four grandchildren; eight great grandchildren; and numerous nieces and nephews. In addition to his wife and parents he was preceded in death by a daughter, Madonna Diane Moss; sisters, Gwynelle Riddlehoover and Helen Hodges; and brother, Dewitt T. Wilson, Jr. Services will be held at 2:00 p.m. on Wednesday at the Harley Funeral Home Chapel with the Rev. Kyle Richter officiating. The service will be live streamed and available to view by visiting Mr. Wilson’s life tribute page at www.harleyfuneralhome.com, where you can leave messages for the family. Burial, with military honors, will follow at Greenwood Memorial Gardens. Pallbearers will be Joe Ponder, Dwight Stroud, Gregg Wilson, Bill Leister, and Richard Moss. Honorary escort will be members of the Senior Adult Sunday school department and nieces and nephews. The family will receive friends from 1:00 – 2:00 p.m. on Wednesday at the funeral home. Memorials may be made to Westside Baptist Church, Open Door Building Fund, 215 Bypass 225 S, Greenwood, SC 29646 httpp://onrealm.org/WestSideBaptistGreenwood/Give). The family members will be at the home. View service here:https://youtu.be/wfSAjoAOdrg

Marett Nelson Wilson, 91, of 206 Autumn Trace, widow of Reba Stroud Wilson, passed way Saturday, October 31, 2020 at Hospice and Palliative Care of the Piedmont. Born in Oconee County, he was a son of the late Dewitt Talmadge Wilson and... View Obituary & Service Information

The family of Marett Wilson created this Life Tributes page to make it easy to share your memories.

Send flowers to the Wilson family.