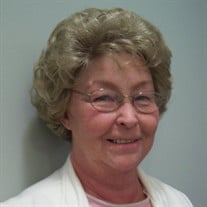 Mary Joan (Sweet) Ludwig, 72, died on December 18, 2021, in Greenwood, SC. She was a loving sister, mother, and grandmother; a strong woman and dedicated matriarch who shall never be replaced. Joan was born on January 14, 1949, in Greenville, SC, to Conway and Mary Ella Taffer Sweet. Some of her favorite childhood memories revolved around Lake Greenwood: exploring with her siblings and fishing with her daddy. The lake would hold a special place in her heart for the next five decades, as both the location of annual family reunions and the place where she’d spend the last years of her life. After graduating from Wade Hampton High School, Joan worked as a respiratory therapist at Greenville General Hospital. She spent the next chapter of her career working in the claims department at Liberty Life Insurance Company (now known as Athene Annuity), where she cherished both her job and her colleagues. Joan’s greatest role, however, was as the matriarch of her family, both immediate and extended. She was the person everyone looked up to, the one everyone knew they could count on. She stayed in touch with relatives near and far, and always made sure that family came first. She was a devoted mother, grandmother, and great-grandmother, taking her girls to dance classes and cheer competitions, and easily earning her title as the ultimate “cheer grandma.” Her granddaughters eagerly looked forward to sleepovers at her house, where they watched Disney VHS tapes and ate way too many fudgsicles. Even after Joan moved in with her daughter, Jodi, all four generations of women piled into her room for movie nights. Joan remained best friends with her sister, Linda, for her entire life. They talked on the phone every single day and went on countless adventures in Joan’s bright yellow Thunderbird: from mining for gems to hitting up thrift stores to, most recently, rocking out at an Aerosmith concert. Joan was a lover of all things Disney — the movies, the park, her Tinkerbell Nikes — and was even a member of the Mickey Mouse Club. She was an avid gardener who adored lilies and hummingbirds, and an amateur genealogist who traced her family tree back to the Victorian era. She was obsessed with family photos (and, despite groans, made sure everyone took a group picture at the lake every year). Joan will be remembered as compassionate and loving, hard headed and tough. She was giving and thoughtful: handing out gifts and cards, as well as advice and hugs, for every occasion. Yet she was also a firecracker: a woman who called it like it was, who never let anything stand in her way, who always had her family’s back. Now that Joan is gone, we will miss her fierce and no-nonsense kind of love. We will miss her embroidered sweatshirts crowded with the names of her “babies”; we will miss her enormous jar of M&Ms. But most of all, we will miss the way she never gave up on her family — and the way she never let us give up on ourselves. She always pushed us to pursue our dreams, supporting us when we stumbled, and cheering the loudest when we succeeded. She was, and will always be, our #1. Joan was predeceased by her parents, and her brother, Furman Sweet. She is survived by her sister, Linda McElveen (Rick); her brother, Terry Sweet (Jan); her daughter, Jodi Rogers (Mark); her granddaughters, Merri Hammett (Cody) and Alexis Rogers; her great-grandchildren, Lilly and Luke Hammett; and many beloved nieces, nephews, and cousins. Services will be held on Tuesday, December 21, at 2 p.m. at Marathon Church, 315 Roe Rd., Greenville, SC. In lieu of flowers, the family welcomes donations to Give Kids The World Village (gktw.org).

Mary Joan (Sweet) Ludwig, 72, died on December 18, 2021, in Greenwood, SC. She was a loving sister, mother, and grandmother; a strong woman and dedicated matriarch who shall never be replaced. Joan was born on January 14, 1949, in Greenville,... View Obituary & Service Information

The family of Mary Ludwig created this Life Tributes page to make it easy to share your memories.

Send flowers to the Ludwig family.