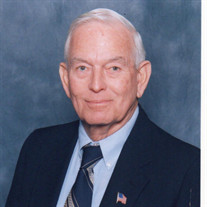 Thomas E. “Ned” Birchmore, 91, beloved husband of Mary Vaughn Birchmore and resident of 1613 Marshall Road, died October 27, 2021, at Hospice House in Greenwood, SC. Born in Greer, SC, he later moved to Abbeville, SC where he attended public schools. He was the son of the late Henry Harold Birchmore Sr. and Anne W. Birchmore. He was also proceeded in death by his brother, Henry Harold Birchmore Jr. and his sister, Claudia B. Riordan. Ned was a proud member of the United States Army and member of the 519th Military Police Battalion serving in the Korean War. He retired from the Greenwood Commission of Public Works in 1985 and enjoyed an active retirement of hunting, camping, fishing and travelling with his wife, Mary. He was a long-time member of Main Street United Methodist Church in Greenwood. Ned was a loving father to his sons, Thomas E. Birchmore, Jr. (Krista) of Edisto Beach, SC and Mark Vaughn Birchmore (Caroline) of Lexington SC; and loved his three grandchildren, Evan Alexander Birchmore (Hannah), Emma Louise Birchmore, and Ansley Caroline Birchmore. Graveside services, with military honors, are scheduled to be held on Saturday, October 30 at 1:00 p.m. at Greenwood Memorial Gardens with the Reverend James McCoy-Bruce and Reverend Gray Stallworth presiding. Visitation will follow the service. In lieu of flowers, memorials may be made to Hospice and Palliative Care of the Piedmont, 408 West Alexander Avenue, Greenwood, SC 29646.

The family of Ned Birchmore created this Life Tributes page to make it easy to share your memories.

Send flowers to the Birchmore family.