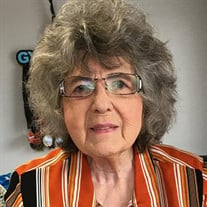 Neila Jarene Hays Brown passed away peacefully in Greenwood, SC on Tuesday, May 11, 2021 in the presence of her loving family. She was born in Stillwater, OK in the home of her Aunt Corrine Matthews and placed in a top bureau drawer on June 2, 1940. Family graveside services will be held at 1:00 PM on Friday, May 14, in Oakbrook Memorial Park under the direction of Harley Funeral Home with Rev. Kyle Hite officiating. A visitation and celebration of Neila’s life has been delayed due to the pandemic. Neila was a member of the First Presbyterian Church of Greenwood. Neila is predeceased by her parents, Juanita Mitchell Hays, and Oliver Neil Hays, Stillwater; a brother, Lynn Mitchell Hays, Stillwater; maternal grandparents Mr. and Mrs. Barney Cleveland Mitchell, Loco, OK; paternal grandparents Mr. and Mrs. Harvey Johnson Hays, Stillwater and several aunts and uncles. Left to cherish her memory are 3 brothers, Harvey Hays, New Orleans, Randy Hays, Stillwater, and Rev. Kim Hays, Perry, OK; her husband, Buck F. Brown, Sr., Ninety Six; son, Buck F. Brown, Jr and wife Menka, Greenwood; daughter Carrie Brown Lucas, Ninety Six; son, Louis Neil Brown and wife Kim, Greenwood. Also, surviving are granddaughters Powers Lucas, Auburn, AL; Dara Brewer, Greenwood; Erica Brown, Greenwood; and grandsons Buck Brown lll (Rachel), Charleston; Trek Brown, Greenwood; Hays Brown, Greenwood; Austin Brown, Pensacola, FL; D. Andrew Murray, Jr. (Ashley), Saluda. Neila graduated from Stillwater High School and attended Oklahoma State University majoring in Fashion Merchandising. The family moved to Ruston, LA where she continued her program of study at Louisiana Tech University. She accompanied her husband as new opportunities motivated moves to Terre Haute, IN and Washington, DC. An energetic organizer, she served as President of Engineerettes, an OSU student wives’ organization, President of LA Tech Faculty Wives and the Rose-Hulman Institute of Technology Faculty Wives. She was a member of P.E.O. Sisterhood and Coterie Club (civic). In earlier years she served as Cub Scout Den Mother, Head Cheerleaders mother, Science fair worker, School advisory board member, Sunday school teacher, Bible School Director, Church Choir member. For the last 20 years Neila put her love for dance and university major to work as the owner and operator of Side Door Dance & Gymnastics Wear, Greenwood. From an early age Neila sought and found her Christian faith. As a child she would put on skates and skate near the neighborhood Baptist church in hopes of being invited to Sunday and Bible Schools. She was baptized as a tween and a faithful participant thereafter. She became a Presbyterian after her marriage and has been a steadfast follower of her Lord and Savior, Jesus Christ. Her death came as she and husband Buck were preparing to celebrate their 62nd wedding anniversary. “A wife of noble character who can find? She is worth far more than rubies.” Proverbs 31 NIV God saw you getting tired, and a cure was not to be, so He put His arms around you, Whispered "come to me". With tearful eyes we watched you and saw you pass away, and though we love you dearly, we could not make you stay. A golden heart stopped beating; hard-working hands were put to rest. God broke our hearts to prove to us, He only takes the best! In lieu of flowers, memorials may be made to First Presbyterian Church, PO Box 426, Greenwood, SC 29648.

Neila Jarene Hays Brown passed away peacefully in Greenwood, SC on Tuesday, May 11, 2021 in the presence of her loving family. She was born in Stillwater, OK in the home of her Aunt Corrine Matthews and placed in a top bureau drawer on June... View Obituary & Service Information

The family of Neila Brown created this Life Tributes page to make it easy to share your memories.

Send flowers to the Brown family.