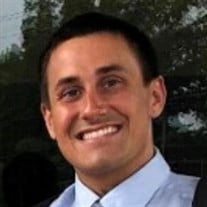 Nicholas Neil LaVecchia Jr.,28, died Sunday, January 3, 2021. The son of Ann Fripp Hampton LaVecchia and Nicholas Neil LaVecchia, Nick was born on February 6, 1992 in Charlotte, NC. Nick attended Sullivans Island Elementary, Laing Middle and Wando High schools. He graduated from South Point High School in Belmont, NC and attended East Carolina University. Nick was loved by all that knew him and while the world has lost a beautiful soul, his dynamic smile will shine in our hearts forever. Nick loved his family, surfing, fishing, laughter, but most of all being a father to his beloved son, Nicholas III. He always considered Sullivans Island and Charleston his home. Nick never met a stranger and he was a brother, son, friend and an instant part of any family he encountered along his journey. May he rest peacefully, freed by the faith he finally found and had sought for so long, forever young, forever in our hearts and forever in the face and spirit of his young son. He is survived by his parents, son Nicholas Neil LaVecchia III and his mother, Jessica Davis of Greenwood, SC; brothers Jack and Alex LaVecchia; uncle Anthony Hampton; uncles and aunt Richard, Michael, and Suzanne LaVecchia; his grandparents Richard and Dolores LaVecchia; a large family of cousins; and his special friends, The Oree’s of Suvillans Island. He was predeceased by his grandparents Ann Fripp Jones Hampton and Dr. Ambrose Gonzales Hampton, Jr. A celebration of Nick’s life will be held on the beach at Sullivans Island and will be announced at a later date. Hopefully the waves will be up that day. A private graveside service will be held for family. In lieu of flowers, donations may be made in memorial to Harbor Moon Recovery, 215 East Bay Street, Suite 201B, Charleston, South Carolina 29401 or to The Mend House, 308 Knox Road, Knoxville, TN 37918.

The family of Nick LaVecchia Jr. created this Life Tributes page to make it easy to share your memories.

Send flowers to the LaVecchia family.