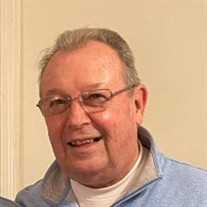 Norman Eugene Ouzts, Sr., 74, of Kimbrook, widower of Toni Shealy Ouzts, died Monday, February 7, 2022 at Self Regional Medical Center. Born in Greenwood, he was a son of the late Samuel E. Ouzts, Jr. and Dorothy Norman Ouzts. Norman was a 1965 graduate of Greenwood High School, where he served as class president. He was the retired owner and operator of Home Entertainment Center and Brewski Brothers. Norman was a member of the Greenwood Sertoma Club and was the founding president of the Greenwood High School Booster Club. He was an avid golfer and enjoyed playing the drums. Nothing made him happier than winning a dollar off of his friends at the golf course. If he wasn’t playing golf, or with family or friends, you could often find him at the beach. He loved to be on the beach with his toes in the sand and listening to beach music. He truly never met a stranger. Norman was preceded in death by his wife, Toni, who was his high school sweetheart and they enjoyed 55 years of marriage. He is survived by his children, Dr. Norman Ouzts, Jr. (Laura) of Windsor, CO, Tracie O. McGovern (Jimmy) and Katie O. Lawrence (Bradley), both of Greenwood; his brother, Jimmy Ouzts (Abby) of Belton; grandchildren, Mari Claire Hawkins (Robert) of Anderson, Samuel Ouzts, Patrick McGovern, Megan McGovern and Beau Lawrence, all of Greenwood; and a great grandson, Oliver Hawkins. A memorial service will be held at 11 a.m. Saturday at St. Mark United Methodist Church Rivers Street Campus with the Rev. Barrett Alewine officiating. The family will receive friends following the service. The family is at the home, 117 Crescent Road. In lieu of flowers, memorials may be made to the JoBeth Owings Ouzts Scholarship at Lander University, 320 Stanley Avenue, Greenwood, SC 29649.

The family of Norman Ouzts created this Life Tributes page to make it easy to share your memories.

Send flowers to the Ouzts family.