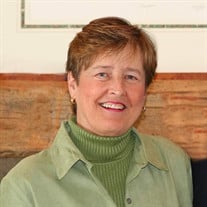 Priscilla Sellers Guthrie St. George, 83, resident of Wesley Commons Independent Living, wife of John A. St. George, passed way Wednesday, September 16, 2020 at Hospice and Palliative Care of the Piedmont. Born in Evanston, IL, she was a daughter of the late John B. Guthrie and Florence Smith Reinardy. She was a graduate of Evanston Township High School and attended Lake Forest College, where she met her husband and soulmate, John St. George. Their 61 year marriage stands as a beautiful testament to unconditional love, commitment, and the ability to laugh a lot. Priscilla loved being a stay at home mom, and CEO of their household in Glenview, IL. She ran a tight ship, but always with a caring and compassionate heart. Her supersonic sense of hearing could catch her kids sneaking in past curfew, as well pick up words not meant for a mother’s ear. She could spot a lie a mile away. Honesty and respect were just two of the many qualities that she instilled in her children, that they carry as adults. Born and raised along the shores of Lake Michigan, Priscilla loved the beauty of water. Many summers were spent making memories at the family cottage on Green Lake, WS. Following retirement, John and Priscilla moved to Bluffton, SC where they enjoyed many years of golf, tennis, and new friends. The pull of waterfront living brought them to Lake Greenwood in 2006. They enjoyed many happy years at Grand Harbor, before moving to Wesley Commons in 2018. She was an avid bridge player and enjoyed collecting many quarter and dollar winnings. Priscilla loved the Lord and was His faithful servant. Over her years she has served as a Bible Study Leader, a Deacon, and a Stephen Minister. John and Priscilla are long time members of First Presbyterian Church of Greenwood. Surviving in addition to her husband, John are her three loving children, Linda Wattman (George), Thomas St. George (Suzanne), and David St. George (Karen); beloved grandchildren, Stephen Wattman, Hailey Wattman, Austin St. George, and Daniel St. George; sister, Susan Heuke (Bruce); and brother, John Guthrie. In addition to her parents, she was preceded in death by her stepfather, Dr. Robert Reinardy; brother, Phillip Reinardy; and sister, Suzanne McReynolds. Due to Covid-19 restrictions, a Celebration of Life will be held at a later date. A private burial will be held at Mount Emblem Cemetery in Elmhurst, IL. In lieu of flowers, the family request memorials be made to Hospice and Palliative Care of the Piedmont, 408 W Alexander Avenue, Greenwood, SC 29646 or to a charity of one’s choice.

The family of Priscilla St. George created this Life Tributes page to make it easy to share your memories.