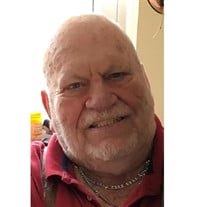 Robert "PA" Maurice Harper, 87, formerly of 205 Marshall Circle, widower of Margaret M. Moore Harper, passed away Saturday, January 23, 2021 at Hospice and Palliative Care of the Piedmont. Born in Madison County, GA, he was a son of the late Robert M. Harper and Nina A. Lyerly Harper Mathis. He was a Greenwood High School graduate and a member of Hodges Church of God. Robert retired from the Greenwood City Police Department, after serving twenty-six and half years he retired as Captain. He was a US Air Force veteran, where he served in the Korean War. He was first married to his beloved wife, the late Margaret Moore Harper of forty-nine years and then to the late Jean Neal Still Harper. He was preceded in death by a son, Robert “Bo” Marshall Harper and his sister, Ruby Jane Brown Surviving are his son Lindy B. Harper; grandson, Robert Lewis Harper (Elizabeth) of Rock Hill; three great grandchildren, Reagan, Nora, and Logan Harper; daughter-in-law, Linda Harper of Greenville; and a devoted companion and dear friend, Sue Bodie of Greenwood. Services will be held at 2:00 p.m. on Thursday at Harley Funeral Home Chapel with the Rev. Charles Caldwell officiating. The service will be live streamed and available to watch by visiting Robert’s life tribute page at www.harleyfuneralhome.com, where you can also leave messages for the family. Pallbearers will be Randy Carter, Alan Davis, Robert Harper, Donald Ouzts, Alton Ouzts, Ray Scott, and Lindy Harper. CDC guidelines will be followed including social distancing and masks required. The burial will follow at Greenwood Memorial Gardens. The family will receive friends before the service on Thursday from 1:00-2:00 p.m. at the funeral home. Memorials may be made to Hospice and Palliative Care of the Piedmont, 408 W Alexander Avenue, Greenwood, SC 29646. The family members will be at their respective homes. To view service click here https://youtu.be/O7oHlWLFs0o

Robert "PA" Maurice Harper, 87, formerly of 205 Marshall Circle, widower of Margaret M. Moore Harper, passed away Saturday, January 23, 2021 at Hospice and Palliative Care of the Piedmont. Born in Madison County, GA, he was a son of the... View Obituary & Service Information

The family of Robert Maurice Harper created this Life Tributes page to make it easy to share your memories.

Send flowers to the Harper family.