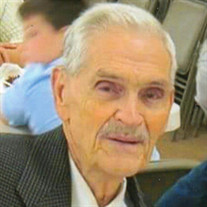 Thomas Cecil Leach was born September 9, 1933 in Habersham, Tennessee and died on April 2, 2021. He was the son of William E. and Nannie Huddleston Leach. Cecil, as he was known to everyone in the years before he went into the Army, grew up in the Stinking Creek community of Campbell County, Tennessee. He spent two years in the Army during the Korean era, stationed in Japan. He was always very proud to have served his country and was rarely seen without his “Korea Era Veteran” baseball cap over the last 15 years. When he returned home from Japan in 1956, his younger sister Jean told him that he simply had to meet her best friend, Norma Cupp. Within 2 months, he and Norma were married and set off on a journey that lasted through four states, four children, 3 grandchildren, 3 great-grandchildren, multiple jobs, more than three million miles driven as a truck driver, and 55 years, until Norma’s death from Alzheimer’s in 2012. On May 31, 2015 he married Gayle McKittrick Guy and moved to Newberry, South Carolina. Our dad was strong, energetic, outgoing, headstrong, and outspoken all his life. He was our first baseball coach, our biggest critic and biggest fan, the person who taught us to drive with a keen appreciation of both the 18-wheelers and the motorcycles on the road, the person who tormented us when we brought home those first significant others as we began dating, and the best Papaw that his grandchildren and great-grandchildren could ever have wished for. He took care of our mom when her Alzheimer’s began to advance, vowing that he would keep her home. It was only the last 5 months of her life and at the insistence of his three children that they both lived in the Langston House in Clinton, so that he could be with her and have the help he needed to care for her. Dad was always great friends with Mom’s 8 siblings and their spouses and much loved by his 26 nieces and nephews and their children, and then Gayle’s sons and extended family accepted him with open arms to give him yet another loving family. Dad was preceded in death by his parents William and Nannie Leach; his infant siblings James, RL, and Aldia; his sister Betty Jean and her husband Delmas Baird; his sister Mary Louise and her husband Floyd Campbell; his infant son Daniel; and his beloved wife Norma Cupp Leach. He was also preceded in death by stepson Jamey Guy, mother-in-law Gladys Brock McKittrick, step-niece Sydney Owens Shealy, and his very special aunt-in-love Peggy Haynie. He is survived by his wife Gayle McKittrick Guy Leach of Newberry, SC; his daughter Donna and husband Phil Beard, granddaughter Kim Beard Wilson and husband Tom, and great-grandchildren Nathan and Claire Wilson, all of Clayton, NC; son Thomas C. Leach, Jr. and wife Charlene, grandson Todd Leach and wife Riley, and great-grandson Brayden Hall, all of Cleveland, TN; and son Neil Leach and wife Brandi and grandson Micah of Greenwood, SC. He is survived by his sisters’ sons, Danny Baird of LaFollette, TN and Tom Campbell and wife Helen of Jacksboro, TN; by 22 nieces and nephews from his Cupp in-laws; and by cousins and friends too numerous to count. He is also survived by stepson David and wife Stacy of Kinards, SC; stepson Don and wife Marian of Silverstreet, SC; step grandchildren Brendon Guy (Rachel), Brittany Pitts (Justin), Riley Guy, Reid Guy; and step great-grandchildren Danielle Guy, Madison Pitts, and Clayton Pitts. Our dad surrendered his life to Jesus Christ in the summer of 1979 and has lived for his Savior ever since. We weren’t ready to part with him yet but we will eventually take comfort from the knowledge that we will be with him again. A memorial service will be held at 1:00 p.m. on Tuesday at the Harley Funeral Home Chapel. In lieu of flowers, the family requests donations to either the Smyrna Presbyterian Church building fund, 32 Smyrna Road, Newberry, SC 29108 or to the Stanfield Church of God building fund, 153 Old Stinking Creek Road, LaFollette, TN 37766. TO view service click here https://youtu.be/sz6HhnWa6JU

Thomas Cecil Leach was born September 9, 1933 in Habersham, Tennessee and died on April 2, 2021. He was the son of William E. and Nannie Huddleston Leach. Cecil, as he was known to everyone in the years before he went into the Army, grew... View Obituary & Service Information

The family of Thom Leach created this Life Tributes page to make it easy to share your memories.

Send flowers to the Leach family.